My memories of Auschwitz 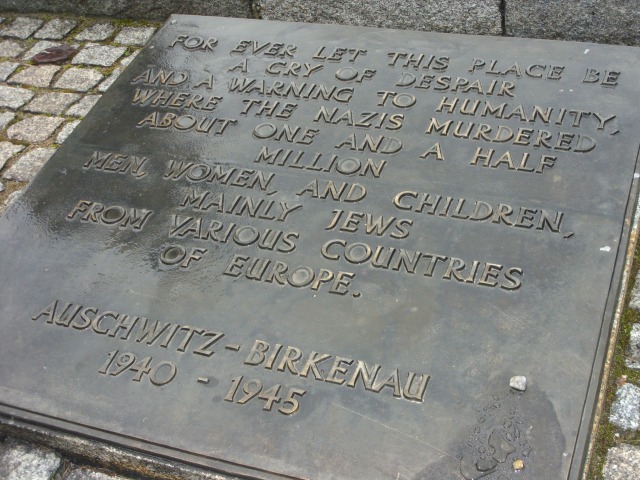 “IMAGINE you, me, your mum and your sister getting off a train and walking up to a man with a clipboard.” My dad said to me aged 14, shortly before I was to go on a school trip to the most infamous death camp Europe has ever seen, which was liberated exactly 70 years ago today.

“He’d most likely point us one way and point your mum and sister the other way. They’d walk off…and you would never see them again.”

I think about that whenever I come across Auschwitz. Pictures, TV, music, anything. My thoughts then move on to what would have become of me and my dad. Truth be told he could easily have been pointed to the gas chambers too, as could I. If not my dad wouldn’t have lasted more than a week I believe. As for me, it depends what part of the camp I’d be placed in.

I have been to Auschwitz twice; something many people wouldn’t want to do. Something many didn’t have a choice in.

My overarching memory is just how massive the entire place was/is, particularly Birkenau – the death camp (Auschwitz II). One can only truly appreciate the sheer scale of the site once you start walking down alongside that railway line until you reach the multi-language memorials, flanked by the ruins of the gas chambers, destroyed by the Nazis prior to the camp’s liberation by the Soviets. Even then it stretches out around you, and despite being their twice I believe I’ve only seen a fraction of the place.

It was by these memorials on my second visit I noticed a group of teenagers just like the one I was with. Then I spotted their large Israeli flag. Part of me wished I’d gone over to talk to them, or even to just be a shoulder to cry on if need be. But I think leaving them to mourn their people’s genocide without interference was in hindsight the right course of action.

Prior to my first visit I knew that personal possessions (glasses, shoes, suitcases etc.) and the hair of those murdered at Auschwitz was on display in the prison camp (Auschwitz I), along with the canisters that carried the lethal Zyklon B pesticide. Whilst trying to visualise a face wearing each pair of glasses and wondering just how many lives the contents of these canisters had ended, our guide began telling a story.

An elderly woman living in America was in Auschwitz when she was a girl. Her family decided that they should all visit it to have an understanding of ‘what grandma went through.’ As her family made its way into the room the suitcases were kept in she stopped dead in her tracks and pointed to the suitcase right by the door and said: “That’s my suitcase.” And it was. The offer to have it removed from the display and returned to her was politely declined.

The most unnerving thing I found about Auschwitz I was the Blocks. What must have gone on in these imposing red bricked silent witnesses is almost too horrible to contemplate. I asked my brilliant history teacher why the windows of one Block in particular, Block 10, were blacked out when we had been inside others. “There’s a reason why they’ll never open Block 10.” She said. “That’s where the human ‘experiments’ took place.”

Next door to Block 10, right by the high perimeter wall, is Block 11. This was the camp’s prison block which contained the standing cells. They stick in my mind because our guide said that to get a dead prisoner out the Nazis would simply smash their legs to pieces.

I suppose I must now address perhaps the oddest part of my Auschwitz experiences: not crying. But I did cry at Tyne Cot Cemetery on the battlefields school trip either side of the Auschwitz ones. The only reasons I can think of for this are, a) there’s a much more visual representation of death at Tyne Cot, and b) Tyne Cot is full of British and Commonwealth soldiers. If I was Polish or Jewish I may well have cried. But I did eventually succumb to tears after an extremely vivid dream I had once I’d returned. I was floating above Birkenau and saw a group of people entering the gas chambers, but I couldn’t do anything to help them.

I clearly remember my former art teacher on the point of tears when we were looking around a room that housed what survived from people’s suitcases. These were pictures of themselves, families, friends, knickknacks, letters, beauty kits and such. I was so engrossed I failed to spot the Israeli party enter the room. I only realised they were there when they began sombrely singing in what I guess was Hebrew. One of my group asked me a question I can’t recall now, but I do remember my answer: “These people were of their great-grandparents’ generation, or even their grandparents’ generation.”

Meeting someone from that generation is something I’ll never forget. He was number 1,327 and therefore one of the first people to be sent to the camp. It was only while researching for this article did I finally find his name again, Kazimierz Smoleń – the former director of the Auschwitz-Birkenau State Museum. Someone in my group asked him via our guide how he survived in Auschwitz for almost the entire war. He answered in English: “Luck, luck, luck.” I made sure to shake his hand and thank him in his native tongue. He thanked me likewise. I’ve not only come across his name again, but in doing so I’ve also discovered that Mr Smoleń is no longer with us. He died exactly three years ago today – on what was the 67th anniversary of the liberation of Auschwitz.

A sight and sound that will never leave me was (on my first trip) a boy a couple of years older than me crying his eyes out looking at a corridor full of the three photos the Nazis took of newly arrived prisoners. Between sobs I could he him say: “These are human beings.”

If you’ve never been I urge you to, but be prepared to feel like you are walking through a crowd of ghosts.

Those who do not learn from history are doomed to repeat it.

1 Response to My memories of Auschwitz